In 2010 I made two attempts to fly to Venice, both of which were thwarted by flight cancellations due to volcanoes and strikes. Determined to get there before years-end I bought rail tickets from London to Venice. 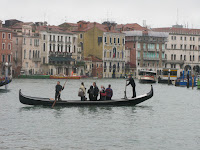 I’ve flown several times but now it seems inconceivable to me that anyone would bother to fly as there are so many interesting & more enjoyable rail options.

There is of course the famously, luxurious Simplon Orient Express but there are many alternative standard ticket options; all requiring a Eurostar to Paris:
· There’s a TGV from Paris to Milan with a change for Venice
· There’s a sleeper train directly from Paris to Venice
· There are routes with an overnight stay in Germany
· But my option was a train via Switzerland
The cheapest standard rail tickets are very competitive with economy flying but the pleasure of the rail journey is incomparable.

Its not difficult to buy tickets over the web from European rail operators, searching hotels is just as easily and timetables are readily available but nothing beats the simplicity of ringing up a package operator like Railbookers (www.railbookers.com) & getting someone else to work out the time tabling, purchasing the tickets, booking hotels & providing backup if things don’t go according to plan.

I boarded a Eurostar at St Pancras station in central London clutching all my rail tickets and accommodation vouchers. Within half an hour the high-speed train is whisking me through Kent before diving under the channel, emerging 26 minutes later in France.

Pulling into Paris’ Gare du Nord I calculated that I’d still be in the security queue at Heathrow if I were flying. I didn’t stop over in Paris because I’ve been there many times but a glass of wine in a street café was a must.

Our high speed TGV left Paris for Switzerland just after lunch and although there’s no border the houses give it away - the bright blue and purple of France giving way to grey, pointy chalet style houses of Switzerland.

Our Hotel du Theatre was a convenient five minutes walk from the station. It was in the old town, a minute from the atmospheric cobbled street of Niederdorf – buzzing with nightlife and the best place in town for informal eating and drinking.

Next morning we were travelling south after a good breakfast and just beyond Lake Zurich the Alps begin rearing up – sharp snow-capped peaks fringed with bright green valleys dotted with black and white cows - wearing bells. Sometimes clichés really are true!

Alpine roads twist and swerve through valleys, others tower spectacularly above us on stilts disappearing into tunnels half way up the side of mountains. Several tunnels and bridges later the train descends to Lake Lugano, and then Lake Como - signalling we’ve crossed into Italy. The lakes are beautiful but these iconic lakeside towns didn’t live up to their celebrity magazine image – from the train it’s a disappointing vision of hundreds of ugly boxy apartment buildings.

Finally the train rolled into the massive Romanesque station at Milan just in time for lunch. But with only one hour before the Venice train departs there’s only enough time for a peek outside and sip a real Italian coffee. 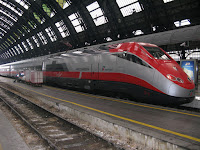 The afternoon train raced east across rich farmland of orchards, cereals and vines and the Italian Alps can still occasionally be seen on the horizon. 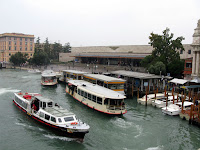 Journeys end is in sight as we cross the lagoon to Venice’s Santa Lucia station. What a treat it is to arrive in the centre of Venice instead of a ten minute trog to the waterfront & a 50 euro/pp water taxi ride from Marco Polo airport, or even worse, an hours packed coach ride down the motorway from Ryanair’s ‘Venice airport’ way out at Treviso.
Posted by Peter at 09:43 No comments:

High-speed trains are all the rage at the moment. The Chinese are planning a direct route into Europe and Deutsche Bahn (German railways) have just completed tests for a 200mph service between London and Cologne (4 hrs), Frankfurt (5 hrs) and Amsterdam (4 hrs).

I can’t wait. Maybe travellers able to pay extortionate first class airfares might disagree but I’ve never experienced a moments joy whilst flying and the flight is only a fraction of the total journey time. Recent research has calculated that 80% of the average European short-haul journey is spent on the ground hassling to, from and inside the airport.
Posted by Peter at 06:07 No comments:

Would I be lying if I said I’ve just climbed the Eiger and the Jungfrau?

I’m just back from a rail trip to Switzerland, which was one of the most spectacularly scenic rail trips I’ve ever done. It took all day to get to Interlaken but it also took most of the day to fly back via Zurich. The difference was that the train journey was hassle free, involved no queues, was spaciously comfortable, allowed for lunch in a Parisian street café and provided some glorious scenery on the way. The return flight was OK but was just boring dead time.

I took the 9.12 Eurostar from St Pancras to Paris Gare de Nord, a taxi, rather than the metro, to the Gare de Lyon & after lunch caught the 14.22 (+1 hour GMT) to Basel. The 17.59 from Basel was a treat with snow and mountains increasing with every mile until we arrived in Interlaken at 7.50pm.

The Swiss railway system is quite superb, trains run through seemingly impossible landscapes and to improbable heights yet is always on time. 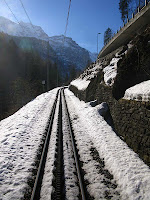 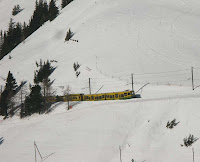 The Jungfraujoch and the route up to it is a wonder of the modern age, climbing extremely steep gradients and burrowing though the top section of the Eiger. A staggering feat of ingenuity and engineering, with breath-taking views only previously experienced by intrepid mountaineers. 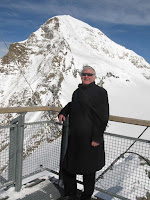 We were surrounded by snow-clad mountains, glaciers stood at the head of valleys, birds circled below and on the valley floor tiny houses were clustered around glitteringly frozen lakes.

The route up to Jungfraujoch is a private rail line so is not included on a Swiss rail pass and costs a pricey 190 Swiss francs (approx £132) but it’s worth every penny for an utterly unique experience.

Next day it was the Glacier Express to St Moritz (included on a Swiss rail pass), famous as the world’s slowest express and possible its most scenic train ride. It has comfortable seats and huge panoramic windows that curve onto the roof so none of the towering landscape is missed. First class passengers dine at their seats but second class have the same quality seats and carriage but without the inclusive meal. 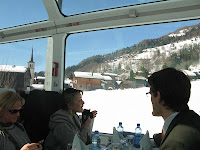 It twists through valleys, across bridges and through tunnels and the higher it gets the deeper the snow. At 6,670 feet it crosses the Oberalp-pass where the snow-capped peaks are dazzling in the sun. After descending down to Chur the scenery gets even better as the train climbs back up towards St Moritz, spiralling through tunnels, crossing deep gorges and across the impressive Landwasser viaduct before eventually hauling into snowy St Moritz at 5,824 feet.

Glitzy St Moritz refuses to be outdone by anywhere else; it has its own mountain top viewpoint on Muottas Muragl. A funicular hauls visitors up to 8,425 feet where there’s an improbable hotel and restaurant (Romantik hotel) with stunning panoramic indoor and outdoor views. Unlike the Jungfrau St Moritz is south facing and gets 322 days of blazing sun so it’s surprisingly hot, although freezing when you step into the shade.

The Glacier Express runs all year but, although its beautiful in summer, its in winter when it becomes magnificent.

I travelled to Switzerland with Railbookers (www.railbookers.com) who booked all the tickets and accommodation as well as the return flight. Their holidays are tailor-made & Switzerland packages start from £699.
Posted by Peter at 12:06 No comments:

Why travel by train?

I love train travel. This can be an awkward thing to admit in certain company but I’m no anorak train spotter and I don’t have a model train set in the basement – I just love everything about travelling by train.

They have so much more to offer the traveller than simply getting from A to B; great train journeys are adventures in themselves, always generating good memories & can be a vacation in itself. As for flying, that’s invariably best forgotten, my only memorable flight is years ago being bumped up to business class on a 14-hour flight home from Los Angeles. The best of the rest are just a fog of mindless tedium and the worst are horrors buried too deep in my subconscious to mention. As for boats & cruises my abiding memory is watching lunch disappearing over the side & wishing I were dead.

Trains are no longer the preserve of those who can’t afford to fly or the train spotter obsessed with locomotive engine numbers. Rail travel doesn’t have the monotonous uniformity of air travel nor are you anonymously processed like a piece of cargo, to be strapped into a seat until you can be off-loaded.

Travelling by rail has been rediscovered by the modern eco-friendly traveller who wants some adventure but without too much hassle or discomfort.
Posted by Peter at 09:08 No comments: